Last week, I was in Auckland and Wellington, speaking on User Experience (UX) and teaching UX Design courses at two WeTest Conferences in Auckland and Wellington. I also had a rare opportunity to teach/speak at large corporates like Bank of New Zealand and Assurity Consulting. I am blown away by the lovely interactions I had and the new bridge I created with many in New Zealand.

Token of Thanks
I extend my heartfelt gratitude to Katrina Clokie for inviting me to WeTest Conference. I never ever imagined that a chance meeting with Katrina at CAST 2013, which was my first self-funded trip to a US conference would bring us together again. I would also like to thank the Conference Organizers Katrina Clokie, Aaron Hodder, Shirley Tricker and Daniel Domnavand for conducting a world-class conference, for taking care of the little details for international speakers and introducing me to a super awesome community in New Zealand which is so passionate, warm, curious, learning-focussed and yet humble. This conference and my interactions will truly remain close to my heart for getting the ‘Conference based Microinteractions’ right!

Teaching UX
It was a fabulous experience to teach UX Courses at the other end of the planet. At the end of these talks/workshops, many people walked up to me and shared many *pain points* in their daily line of work. For example, one of the workshop organisers, Merridy said, “Pari, I am going to put up a board indicating ‘Toilets’ on the door and avoid frustrating our visitors.” One of the conference organisers Shirley mentioned, “The motion detector lamb in our service apartment doesn’t light up instantly and expects a tribal dance which needs to be fixed.” I was thrilled to see people pick up this concept so quickly and apply it at work.

Ctrl+Alt+Delete
Have you ever wondered why you need ‘Ctrl+Alt+Delete’ to lock/unlock windows? Did you ever wonder why we couldn’t have a single key to do the same task? In my early days of school, I was told to believe that 3 keys were given as a security measure (God knows how this could prevent hackers though!). However, Bill Gates confessed that having three keys was a mistake. “It was a mistake,” Gates admits to an audience left laughing at his honesty. “We could have had a single button, but the guy who did the IBM keyboard design didn’t wanna give us our single button.” David Bradley, an engineer who worked on the original IBM PC, invented the combination which was originally designed to reboot a PC. This brings us to microinteractions.

A microinteraction is a contained product moment that does one task well.

Every time you change a setting, update a device or post a tweet, you are engaging with a microinteraction. They are everywhere and they just need some *noticing*. Microinteractions are so simple that we don’t notice them until something goes wrong. Yet, they are incredibly important in creating delightful experiences for users.

Trigger
A trigger initiates a microinteraction. For example, turning ON a lamp needs someone to press the switch.

Rules
The rules determine what can happen, what cannot happen and the sequence of events that might happen. 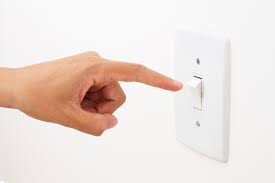 For example, what should happen when a user presses the switch in a particular direction (Up/Down), is determined by rules defined for this lamp.

“Sending back to the user, information about what action has actually been done, what result has been accomplished is a well-known concept in the science of control and information theory. Imagine trying to talk to someone when you cannot even hear your own voice, or trying to draw a picture with a pencil that leaves no mark: there would be no feedback.”

Feedback gives each action an immediate and obvious effect to avoid pain to the user.

Loops and Modes
Loop is a cycle and mode is a state. Consider ‘Memories’ feature on Facebook. Facebook app constantly loops into your account to check if you have posted something on this day, 1 year, 2 years, 3 years….. X years ago. If the condition turns out to be true, a message pops up to remind you of your memory and your willingness to share your memory.

If you share the memory, the state of your timeline changes, by showing you a memory in addition to other posts on your timeline. To summarize, loops & modes form the meta-rules of a microinteraction.

Sketchnote
While there are different components that form a good microinteraction, one should remember that each one must be applied based on the context. Putting a hard rule saying, ‘Every microinteraction has to follow the set guidelines may turn out to be painpoints rather than delightful experiences.’ TEST Yvonne Tse, who works at Assurity Consulting in New Zealand attended my talk on ‘Microinteractions’ at WeTest Conference, Wellington. She created a lovely sketch note that is very close to what I covered in my talk. Take a look. 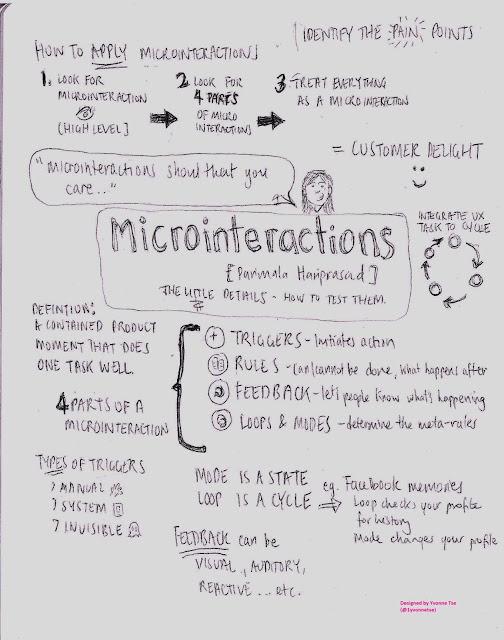 Show That You Care!
Users today, have scores of options to choose from. All they want in return for their loyalty is that you care. In the words of Dan Saffer, 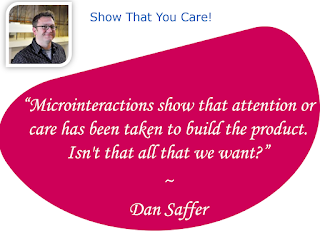 What microinteractions have made you happy today?

The Writer's Block and It's Mysterious Journey


This article was originally published on Linked In.


Wikipedia describes writer's block “as a condition, primarily associated with writing as a profession, in which an author loses the ability to produce new work.”Anything a writer writes is new work indeed which contradicts the definition itself. Confused? Read on.
Many people have written about Writer's block in the past. Naomi Karten writes that every writer hits writer’s block and one needs to unblock himself. Seth Godin thinks that writing isn’t the hard part, it’s the commitment. He also talks how Writer’s block never existed before the 1940s and it became a hit with writers only when Writing became a respectable and lucrative profession. Seth asks amusingly,

No one ever gets talker's block. No one wakes up in the morning, discovers he has nothing to say and sits quietly, for days or weeks, until the muse hits, until the moment is right, until all the craziness in his life has died down. Why then, is writer's block endemic?

Writer’s block is an excuse to get away from writing. It’s at best, the fear of writing anything crappy. It’s not the inability to write that is the problem, it’s the hard work, motivation and commitment to write that writers lack. Additionally, writers avoid exploring different methods to improve their writing from time to time.

The Fieldstone Method
Writing is not as easy as it appears to be. It’s not as if, a writer sits in a beautiful apartment with a beach side view staring at palm trees and ideas start striking like stars. Writing is about serious thinking. It’s about choosing from ideas, facts, stories, plots, and characters accumulated over time. Gerald M Weinberg calls these nuggets as Fieldstones. This means that any writer would have a ‘Work in Progress Inventory’ that may include several books in different stages of completion, article drafts, a collection of quotes, bits and pieces of writing that amused the writer from his reading experiences and so forth. He may carry a pen and paper (tools) to collect his fieldstones all the time. Yeah, all the time! Note that the writer may not use all of these right away. He hopes to use them someday.

Aspiring writers all over the world are desperate to get an answer to the most dangerous question, “How does one overcome writer’s block”. Some of these writers expect a magical answer, “Oh! Writer’s block indeed exists and you need to do A,Band C to conquer it.” Getting stuck cannot be excused as Writer’s block. There’s one best way to beat your mind out of getting stuck – Start Writing!

Good Writing References
I say this often to aspiring writers and I'll say it again, "Good Writers Read". Reading helps you improve your writing skills. So, if you aspire to get better, start reading.

How do I deal with Writer's Block?
I get stuck with writing very often, not because I lack ideas or the will to write, but because I do not find time. The truth is, I do not *make time* for writing. As Seth Godin points out, it's the commitment that matters and I try and keep that, to be able to write my articles.

How do you handle writer's block?